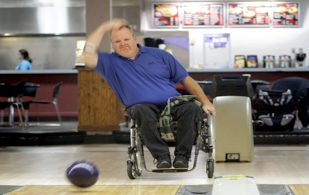 “I know I said I can’t feel my knees,” Holscher says, “but let me tell you, they were weak.” said George Holscher, Virginia, as he rolled the last ball in the 10th frame for his first “300” of his bowling career.  For George and his team, it was just another Monday night, November 26th at Indian River Lanes where George bowls in league play.  Little did he know how special this night was going to be for him and all those that watched as the 12th ball rolled down the lanes and George rolled into wheelchair bowling history.  George became only the second person in the history of the American Wheelchair Bowling Associations 52 year history to bowl the “Perfect” sanctioned game.  Shawn Beam became the first to achieve such an accomplishment in May of this year. “When you’re on a streak like that, the whole house gets quiet,” he says. “Everyone else stops bowling. It gets tense.” With a deep breath to steady his nerves, he let the last throw leave his fingers. The 60 feet to the pins seemed like 60 miles. His heart pounded with each revolution of the ball. “Everyone just went crazy. It was amazing.” For those of us that know George, he is one of the most personable people one will ever come in contact with, always willing to help his fellow bowler with their questions.  He is simply a bowler that gives back to the sport.  The AWBA extends its congratulations to George for his contribution to the sport of wheelchair bowling and his most recent accomplishment.  We would also like to express our thanks to Joanne Kimberlin and the Virginian-Pilot for the coverage of this outstanding achievement.  They say things happen in a series of 3, so who will be the next “Perfect” bowler to achieve their “300”?  It could well be you!!!!!!!!!