After the dust settled we had a total of 18 entries as some of our regulars were hospitalized and dealing with other issues that prevented them from participating this year. We wish better days ahead for Harold Bowman, Horace Boyd, Larry Chauncey and Paul Wolbert in particular.

That said, the doubles had 8 teams entered with the final match between Rich Gabory and Ron Johnson going up against Wayne Webber and Dave Roberts with Rich and Ron winning the Doubles Crown.

The matches in the A began with Phillip Daniel besting Rich Gabory (222-192) before losing to Henry Walters (234-195). Ron Johnson eliminated Henry (184-170) but was unsuccessful in ousting top qualifier, Roger Templar (228-193) who had bowled very consistently throughout the tournament.

Once again, Wayne and the staff at Pin Chasers did a fine job providing an excellent venue for our group.

Thanks to all who participated and made this a fun and memorable event, especially the out of state bowlers. Thank you Nancy for your expert scoring and boosting 50/50 funds with Kim Green and Pat Farrington. Thank you all!

Lastly thanks to PVA National represented by Alan Earl, FGCPVA represented by Davis Celestine and our other sponsors for their continuing support. Hope to see more of you next year. 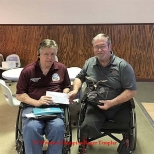 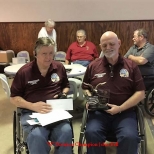 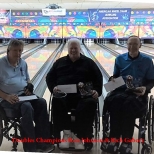