The Mid America Chapter of the Paralyzed Veterans of America strives to host the best wheelchair sports events on the PVA tournament trails.  From bass fishing to billiards and bowling we try to be above average by hosting at the best facilities and providing the best prizes and payouts.  Our bowling tournament proves this by hosting at the Firelake Bowling Center where the PBA Pros had competed just a few weeks earlier.  Also we provided one of the largest prize pools with a $1500.00 first prize in scratch, A Division and B Division.  With our chapter paying 25 places and only 22 participants, everyone got checks.

We thank the sponsors, without their support we could not host such a great event.  The AWBA provided both financial and technical support.  PVA provided a majority of the financial support as well as the shirts and trophies.  Firelake Bowling Center provided the excellent facilities at a much-reduced cost.  Storm provided a bowling ball and shirt certificate.  STORMOR storage facilities in OKC provided monetary assistance.  Once again, thanks to all of our sponsors.

We started the tournament without a computer program that most other tournaments use, therefore Scott Ellis entered and calculated all data by hand and did an excellent job.  Thank you Scott!  Thanks also to Bill Kokendoffer (chapter president), his wife Belinda Kokendoffer and Lisa Herrera for help with the 50/50s and raffles.  Thanks again to Scott Ellis for his photography.

Doubles started on Thursday with 9 teams.  After a 3-game set, 8 teams rolled off on a tournament style elimination.  Kavin Monroe and Kenneth Hill won over Mike Deloach and Eddie Hutchens. Dave Nelson and Tom Richey placed in the money at third.  Everyone had a fun time and got to bowl with new friends.

The UP/DOWN 9 PIN NO TAP event was held on Friday night and everyone had a great time. Kavin Monroe and his team won, followed by Stephen Smith and his 3 lady team members for second.  We plan on making it even bigger and better next year.

The singles competition started Friday for 2 sets of 3 games.  Shawn Beam won the $40.00 bounty for the first 4 bagger, Mike Brewer won the bounty for the first turkey even though he had a 4 bagger and Kenneth Hill took home the prize for shooting (5) strikes in a row.

After Saturdays 2 sets, the 22 bowlers were ready to wrap it up on Sunday.  The scratch roll offs started after the fifth set of 3 was completed.  In scratch division, Kenneth Hill finished fifth since he did not compete on Sunday.  Phillip Daniels (4) took on Mike Deloach (3) who won 186-168.  Next Mike bowled against Shawn Beam (2) with Shawn winning 192-165.  Shawn then went on to win the scratch division over top qualifier, Eddie Hutchens (1) 192-180.  Congratulations to Shawn.  In the handicap A DIVISION Local bowler Gil Herrera (5) bowled against Gary Poole (4) with Gil winning 189-185.  Next Gil bowled  Kevin Schaefer (3) and Kevin won 231-155.  Mike Brewer (2) beat Kevin 212-185.  The number one qualifier, Kenneth Mumford (1) now faced Mike for the championship.  Kenneth bowled a great game to defeat Mike 271-226.  Congrats to Kenneth.  The B DIVISION roll offs started with Addis Gonte (5) defeating Kavin Monroe (4)  239-212.  Addis then defeated Bryan Schaner (3) 201-199.  Addis then lost to Stephen Smith (2) 197-266.  Stephen then bowled against Ivenhoe (Tom) Richey (1) who had the High Handicap game and the High Handicap Series.  Ivenhoe won 244-219.  Congratulations to him for bowling his best ever.  Also, congratulations to Kenneth Hill for High Handicapped Game of 272 and to Eddie Hutchens for High Scratch Series of 630.

Thanks to all who participated and to those who worked to make this great event possible. 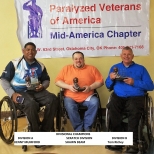 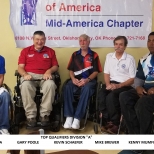 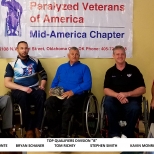 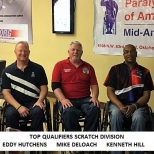 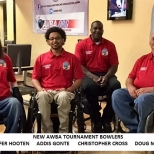 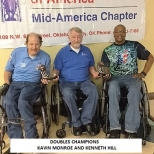 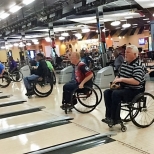 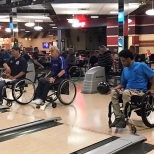 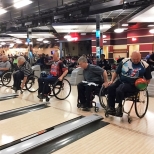 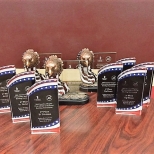 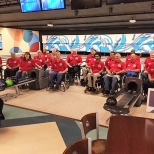 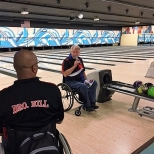 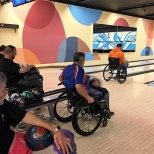 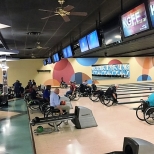 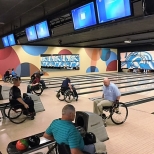 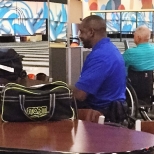 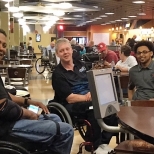 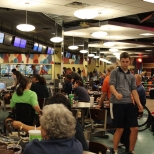 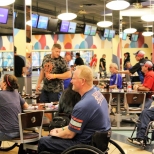