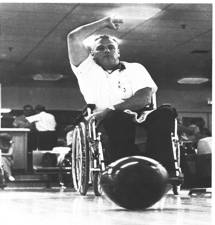 For any organization or movement to form, there has to be a need for that particular group.  In order to see the need there has to be a person or a group of people with vision.  In the case of the AWBA, that person was Richard F. Carlson. In the spring of 1962, Richard of Huntsville, Alabama came to Louisville, Kentucky to bowl in the annual Southern Bowling Congress Tournament.  That was unusual in that he bowled from a wheelchair which was a rarity in most sectional tournaments.  It was important as well since it provided him an opportunity to expound on the concept of creating a national organization dedicated to growing the sport of bowling from a wheelchair, an elusive dream he and a few cohorts had toyed with for some time.  His vision was grand, to conduct the first Annual National Wheelchair Bowling Tournament.  He took his ideas to the Greater Louisville Bowling Association, explaining that while the task was challenging, his commitment and dedication to the sport was up for such a challenge.  With the support of local businesses, Richard set out in an attempt to draw as many as 10 or 12 to the first National Wheelchair Bowling Tournament with Louisville as its first site. It was a pleasant surprise to receive 30 entries from thirteen states to compete in the inaugural outing in June 1962.  Thus, the AMERICAN WHEELCHAIR BOWLING ASSOCIATION was born. Since that time the organization has grown to over 500 members throughout the continental United States.  The AWBA now has an average of 10 tournaments a year spread throughout the country with the National Championship now held in June of each year.  The attendance at the National has grown from that initial 30 to an average of over 100 participants, representing every skill level within wheelchair bowling. The AWBA has formed a number of alliances with organization such as the Veterans Administration, Paralyzed Veterans of America, and youth organizations to promote and grow the sport of wheelchair bowling. The AWBA is a 501C non-profit organization dedicated to our motto in life; “Ability not Disability Guides Our Life”.