This year we bowled midweek hoping to attract additional bowlers. Unfortunately, with many people down with injuries and the Pandemic the field was set at 23 bowlers. We adhere to the State Covid-19 guidelines for this event.

Wednesday we hosted 10 doubles teams. The team of Terry Rock and Mike Marcheskie bested the team of Dave Nelson and Jason Nelson in the championship match.

B division roll offs was very competitive also. Match one pitted Keith Green going up against Anthony Radano with Green besting the match 257 with Handicap to 200 with H/C. Match 2 Keith Green challenged John Melvin as John won 218 with H/C to Green’s 185 with H/C. John Melvin challenged Johnny Holand but John lost 215 to Johnny’s 245 with H/C. Dan Formento proved to be too much for Johnny Holand in the championship match Dan winning 263 TO 226 with H/C. Congrats to all who participated.

In the B division John Melvin won HHS with a fine 732 series and Dan Formento got HHG of 280. Below is a summary of all the scores.

I would like to thank to National PVA, Pin Chaser Veterans Lanes and staff, FGCPVA, and AWBA for their continued support of this great tournament. Also I would like to thank the bowlers who attended and the friendships and competition that this event created. Such a great time was had by all. 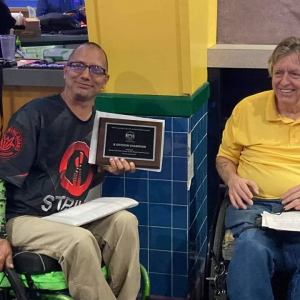 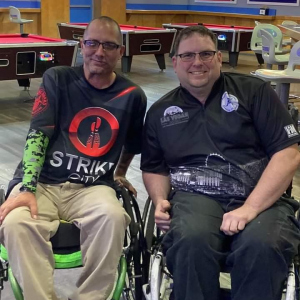